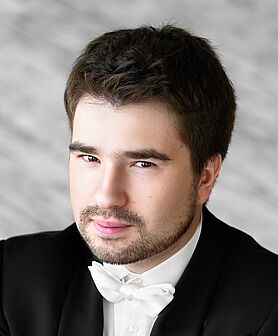 Born in Moscow, tenor Alexander Chernov graduated from the Moscow State Tchaikovsky Conservatory with honors. During his studies Alexander prepared some leading tenor roles of the studio repertoire, such as Rinuccio in Puccini’s «Gianni Schicchi», Rodolfo in Puccini’s «La Boheme», Alfredo in Verdi’s «La Traviata», Lensky in Tchaikovsky’s «Eugene Onegin».

The opera studio was followed by a number of internships abroad including Benedetto Marcello Conservatory in Venice, Italy (2016) and Opera Monte Carlo (Monaco), where he refined his skills at the Young Russian Singers Academy (2017). He has also participated in various master-classes including those of Neil Shicoff and Jose Van Dam.

In 2017 Alexander debuted at “Helikon Opera” theatre (Moscow, Russia) performing the role of Prince in Prokofiev’s “The Love for Three Oranges”. In the same year he joined B. Pokrovsky Chamber Opera Theatre, where he made a successful debut as Rinuccio. Within a few years his repertoire included already Don Ottavio (Don Giovanni), Vakula («Cherevichki» by P. Tchaikovsky), Gritsko (The Fair at Sorochyntsi by Musorgsky) and Luigi (Il Tabarro).

In 2020 Alexander Chernov became a soloist at the Bolshoi Theatre of Moscow, widening his repertoire with Edmondo («Manon Lescaut» by G. Puccini), Don Luigino («Il viaggio a Reims» by G. Rossini), Monsieur Triquet («Eugene Onegin» by P. Tchaikovsky), First Sailor («The Tale of Tsar Saltan» by N. Rimsky-Korsakov) among others. In January 2021 he sang the title role of Kai in the opera Kai and Gerda by composer Sergei Banevich.

Alexander Chernov also has plenty of experience on the concert stage. In 2018 he participated at the London Philharmonic Festival «Changing Faces: Stravinsky’s Journey» where he appeared as Hussar Vassili in Stravinsky’s «Mavra» under the baton of Martin Brabbins. Among other concert engagements there are two Requiems (by Mozart and Verdi), Stravinsky’s «Renard» and Bernstein’s «Candide».