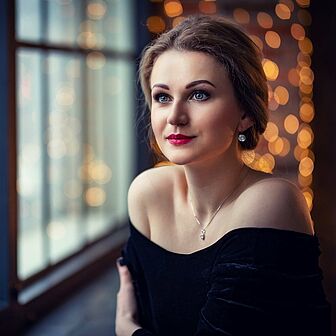 A former member of the International Opera Studio at Opernhaus Zürich and of the Salzburger Festspiele’s Young Artist Project, Estonian mezzo-soprano Dara Savinova has rapidly raised her international profile in recent seasons. She is praised for her brilliant mezzo-coloraturas, enchanting stage presence and meticulous diction.

In May 2021, she won the first prize in at the José Carreras Grand Prix of the Elena Obraztsova Foundation in Moscow. In 2019 she became finalist and got special prize at the International Singing Competition (CLIP) in Portofino (Italy).

Her recent highlights include her role debut as Angelina (La Cenerentola) at Royal Swedish Opera, Ozias (Juditha Triumphans) at the Théâtre du Champs-Elysées and Eudossa (Irene) at the Theater an der Wien.

She intrigues audiences in the title role of Carmen, one of her signature roles since Jean-Christophe Spinosi invited her for her debut on a tour in France, Spain and Russia.

The 2021/22 season includes St. Matthew Passionconcerts in France with Leonardo García Alarcón, Bach’s B Minor Mass with the Gulbenkian Orchestra and Choir in Lisbon, Cherubino in Le Nozze di Figaro at the Stadttheater Klagenfurt and at the Staatstheater Hannover, role of Komponistin Ariadne auf Naxos at the Landestheater Detmold. Role of Elisa in the Bononcini’s opera “Astarto” at the Innsbrucker Festwochen der Alten Musik.

In the season 2023/2024 she will return to the Royal Swedish Opera as Rosina in a new production of “Il Barbiere di Siviglia”.

In previous seasons she performed the role of Eustazio in Rinaldo and Dorabella in Così fan tutte at the Festival della valle d'Itria under the baton of Fabio Luisi, Goffredo in Rinaldo in Moscow and Vienna with Jean Christophe Spinosi’s Ensemble Matheus, Amenofi in Mosè in Egitto at the Bregenzer Festspiele, Zweite Dame in Die Zauberflöte at Theater Basel, her role debut as l’Enfant in Ravel's L'enfant et les sortilèges at Opernhaus Zürich and Rosina in Il barbiere di Siviglia at the Bashmet Festival in Sochi.

A part-time member of the ensemble of Theater Detmold through the 2018/19 season, she sang roles such as Dorabella in Cosi fan tutte, Nancy in Flotow's Martha, Hänsel in Hänsel und Gretel and Siebel in Gounod's Faust.

Other engagements include Pierotto in Linda di Chamounix and the title role of Carmen in Tartu, the roles of Ino and Juno in Semele at the Beaune Baroque Opera Festival.

Dara Savinova is a graduate of the Salzburg Mozarteum and speaks Estonian, Russian, English, German, Italian, French and Swedish.