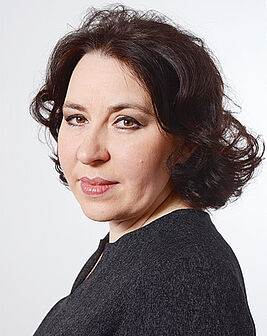 Polish mezzo-soprano Ewa Wolak possesses a voice with a huge range and easyness. She is at home with Händel’s coloraturas as well as Verdi‘s and Wagner‘s alto roles. These unique qualities have brought her to many major opera houses and concert halls around the world.

Wolak received her musical training at the music conservatory in Cracow (viola, singing) and at the University of Music in Karlsruhe. She is a prizewinner of the IVC ‘s Hertogenbosch, the Grand Prix Maria Callas in Athens, as well as a recipient of the European Union Prize for Cultural Heritage. In 2011, she was awarded the title of Kammersängerin.

Ewa Wolak has performed  many of Handel’s opera roles such as Eduige in Rodelinda, Bradamante in Alcina, Irene in Tamerlano, Carilda in Arianna in Creta, and the title roles in Amadigi and Salomon.

Her most recent  and upcoming engagements include Erda in Das Rheingold and Siegfried, Schwertleite in Die Walküre, Ulrica in Un ballo in maschera at Deutsche Oper Berlin, Finnish National Opera, Malmö Opera, Opéra Nationial de Lorraine Nancy and the Luxembourg Grand theatre, 3rd Lady in Die Zauberflöte at Théatre Capitole of Toulouse, Dalila in Samson et Dalila at Staatstheater Karlsruhe, where she sings as resident soloist, and Jocaste in Stravinsky’a Oedipus Rex at Oper Graz. Her Ms. Quickly at the Malmö Opera in autumn 2020 was cancelled because of the Covid-19 pandemic.

As a frequent concert artist, Ewa Wolak has performed at numerous festivals all over Europe including the Händel-Festspiele of Göttingen and Karlsruhe, the Warsaw Autumn, Tyrolean Festival, Vilnius Festival, and Wratislavia Cantans. Wolak is often heard in concerts with the works of Krzysztof Penderecki conducted by the composer himself.