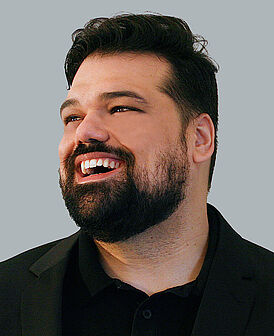 Italian tenor Giordano Lucà has appeared in the leading roles on important stages, such as Teatro San Carlo in Naples, Palau des Artes in Valencia, Hungarian National Opera in Budapest, Concertgebouw in Amsterdam, Portland Opera and Tiroler Festspiele in Erl, Savonlinna and Ravenna Opera Festivals. His repertoire includes Duca/ Rigoletto (Padova, Rovigo, Parma, Tallinn) and Rodolfo/ La Bohéme (Mumbai, Genova, Napoli, Rovigo, Savona, Bergamo, Piacenza, Corfu, Escorial, Tallinn). He sang Edgardo/ Lucia di Lammermoor 2017-2018 in Padova and Budapest. He sang Cassio/ Otello and Macduff/ Macbeth at the Ravenna Festival, staged by Christina Muti. His role debut as Alfredo took place in 2013 at the Tiroler Festspiele in Erl, under the baton of Gustav Kuhn. In 2014 he made his house debut at the Estonian National Opera in the role of Rodolfo and returned there to sing Alfredo and Duca. He has performed TebaldoI Capuleti e i Montecchi at Stadttheater Klagenfurt and returned there to sing Roberto/ Maria Stuarda and Alfredo/ La Traviata. In 2021 he appeared at Staatstheater Kassel as Alfredo in a covid reduction of La Traviata.

In 2019 he made his Japan debut at the “Bunka kaikan” concert hall in Tokyo with “Rigoletto” by G.Verdi conducted by M° R.Muti. He debuts as Ismaele “Nabucco” followed at “Concertegebouw” Amsterdam, conducted by M° G.Andretta. In same year he debuted as Nemorino “L’ elisir d’amore” by G.Donizetti at “Teatro G.Verdi” di Padua and Bassano del Grappa, conducted by M° N.Simoni,

Giordano Lucà was born in Rome, Italy. At the age of 16 he was discovered by the renowned soprano Katia Riccarelli, who encouraged him to study to be an opera singer. Soon after he began his studies at the Music Institute of Milano under Clizia Aloisi, Sergio La Stella and Althoff Pugliese. He also attended masterclasses by Enzo Dara, Monserrat Caballè, Luciano Pavarotti and Marcelo Alvarez. He is prizewinner of various international competitions, including Operalia 2010 (2nd prize) and BBC Cardiff Singer of the World 2009 (audience prize). A sought-after concert singer, he has performed in Vatican, Beijing, Shenzen, Zaragoza, London, Glasgow, in Italy for the broadcasting company RAI 1. He sang the tenor solo in Verdi's Requiem in Utrecht and Rossini's Stabat Mater in Pesaro and Ravenna.