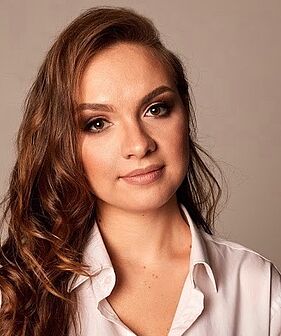 With the St. Petersburg All Together Opera Festival, under the baton of Fabio Mastrangelo, she has performed Mimi (La bohème), Pamina (Die Zauberflöte), Marfa (The Tsar's Bride), Ännchen (Der Freischütz). In 2016 she sang Olga in Dargomyzhsky’s Rusalka at the Tchaikovsky Concert Hall in Moscow. She appeared as Micaela (Carmen), Nedda (I Pagliacci) and Tatyana (Eugene Onegin) at the Krasnoyarsk Opera and Ballet Theatre in 2015.

Olga Cheremnykh began her studies at the Novosibirsk Conservatory in 2009 and graduated from the St. Petersburg Conservatory in 2014. She won the all-Russian contest Young talents of Russia in 2008 as well as the 3rd prize at the Antonín Dvorák Competition in 2014 and the 3rd prize at the International Slovtsov Competition 2015, in Krasnoyarsk. She has performed the roles of Contessa (Le Nozze di Figaro) and Tatyana (Eugene Onegin) the Opera and Ballet Theatre of the Saint Petersburg Conservatory.