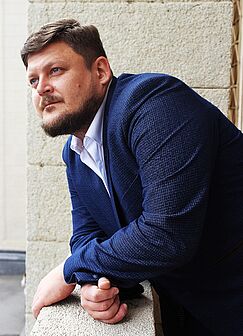 Alexey Zelenkov made his German debut in the spring 2022 as Michonnet in Cilea’s Adriana Lecouvreur in Düsseldorf. This autumn he is singing Scarpia Tosca with Deutsche Oper am Rhein as well as Ibn-Hakia Iolanta at Theater Kiel, where he also appeared at short notice as Amonasro Aida.

His other guest performances have included the title role of Rigoletto at the Bolshoi Theatre Moscow in 2019. As Tomsky he has appeared in Krasnoyarsk and as Scarpia, Renato, Marcello and Robert Iolanta at the Mikhailovsky Theatre St. Petersburg. In 2018 he participated on a tour with NOVAT in South Korea.