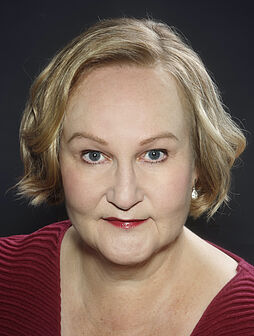 “Kirsi Tiihonen was an extremely fortunate choice for the role of Brünnhilde, that it seems to be made for her!” The press marvelled at her recent engagement for the complete Ring cycle at Theater Kiel during the 2017-19 seasons. “Her huge voice holds everything together like the heart piece of this production - she sings with tremendous passion but sounds at the same time so unbelievably natural and authentic. Very strong!”

After winning several main prizes in major international singing competitions, such as the Cardiff Singer of the World, Kirsi Tiihonen began her career at the Finnish National Opera, singing Elisabetta (Don Carlo), Donna Anna (Don Giovanni), Leonore (Fidelio) and Desdemona (Otello). She was subsequently invited to return as a regular guest. During 1997-1999, she debuted at the Savonlinna Opera Festival in the roles of Elisabeth (Tannhäuser) and Aida, followed by Senta (Der fliegende Holländer) and Venus/Elisabeth. In 2000, she added the roles of Sieglinde (Die Walküre) and Gutrune (Götterdämmerung) to her repertoire, singing with the Berlin State Opera on their tour of Japan under the baton of Daniel Barenboim. During the following seasons, she sang Amelia (Un ballo in maschera) at the Royal Danish Opera, Isolde (Tristan und Isolde) at the Gothenburg Opera, Leonore (Fidelio) at the Komische Oper Berlin and the role of Riitta (The Last Temptations) by Joonas Kokkonen, performed at both the Tampere Opera and the Prague Spring Festival.

In 2005, the Finnish artist celebrated her debut at La Scala in Milan performing Elisabeth under the baton of Jeffrey Tate. The same year she made her Richard Strauss debut as Ariadne (Ariadne auf Naxos) at the Lyon Opera and her second Strauss role, Die Färberin (Die Frau ohne Schatten) in Helsinki, for which she received international critical acclaim. In the autumn of 2006, Kirsi performed the role of Die Färberin for the Essen Aalto Opera under maestro Stefan Soltesz and performed Isolde at the Théâtre de la Monnaie in Brussels.

Some international career highlights include Isolde at the Leipzig Opera, Santiago de Chile and with the Norwegian Opera’s tour to Madrid, Leonore for the Palm Beach Opera and the Berlin State Opera, Agathe (Der Freischütz) in Helsinki, Senta in the Philipp Stölzl production of Der fliegende Holländer at the Basel Opera as well as Brünnhilde (Siegfried) in Essen. In 2009, Kirsi debuted as Elsa (Lohengrin) at the Tampere Opera and returned to Helsinki to perform the role of Ellen Orford (Peter Grimes). Her most recent performances include Sieglinde (Die Walküre) at the Finnish National Opera, her debut as Kostelnicka in Janacek’s Jenufa at the Malmö Opera in Sweden and Isolde at the Pablo Casals Festival in Puerto Rico. In 2017, Kirsi made her debut as Turandot at the Kiel Music Festival. In the 2018-19 season, she sang in the Patrice Chéreau production of Elektra, conducted by Esa-Pekka Salonen at the Finnish National Opera. In 2019, she made her debut at the Deutsche Oper Berlin as Larina in Eugen Onegin followed by Die Aufseherin in Elektra. In the summer of 2022, Kirsi sang the role of Riitta in Joonas Kokkonen’s opera The Last Temptations at the Kokkola Opera Festival.