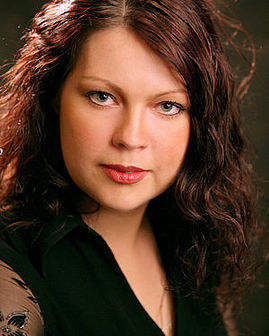 Soprano Oksana Kramareva is the leading spinto soprano of the Ukrainian National Opera in Kyiv, where she recently sang the roles of Abigaille, Cio Cio San and Aida. She has been a prize-winner in several international competitions, including the 2nd prize at Plácido Domingo’s World Opera Competition OPERALIA 2008 in Québec.

Oksana started her opera career in 2004 as a soloist of the Kharkiv Opera in Ukraine. Soon after, she became a member of the soloist ensemble at the National Opera in Kyiv, where her roles included Tatjana in Eugene Onegin, Lisa in Pique Dame, Leonora in Il Trovatore, the title roles in Aida, Norma and Turandot as well as Yaroslavna in Borodin’s Prince Igor.

Numerous guest engagements have taken Oksana around the world, performing Leonora (Il Trovatore) in Germany, Aida in Spain and Japan in 2006, as well as in 2007 at the Tatarstan National Opera, and Yaroslavna with St. Petersburg Opera on a tour to Japan. In 2008, Oksana appeared in Verdi's Requiem and as Lisa (Pique Dame) at the Mariinsky Theatre in St. Petersburg. The following year, Oksana was invited to sing Aida at the Québec Opera House in Canada and Amelia (Un ballo in maschera) at the Aalto Opera in Essen in 2010.

In January 2012, after her maternity leave, Oksana Kramareva returned to the opera stage in the title role of Puccini's Turandot in Trondheim and the following year, she toured the Netherlands in the title role of Tosca. In spring 2015, Oksana sang Aida at the Malmö Opera and in the summer she portrayed Tosca at the St. Margarethen Opera Festival. In autumn 2015, she returned to the Malmö Opera in the role of Amelia (Un ballo in maschera) under the baton of Maestro Pierluigi Morandi and, later in the season, was heard as Norma at the Kassel State Opera in Germany. In 2016, she debuted with the role of Abigaille (Nabucco) at the Ukrainian National Opera in Kyiv and later on at the Shalyapin Festival in Kazan.

Oksana’s most recent engagements include Amelia at the Malmö Opera, Beethoven's 9th Symphony on a tour to Japan, Turandot with the Jalisco Philharmonic Orchestra in Guadalajara, Mexico, and a concert at the Ravenna Festival presenting excerpts from Nabucco performing the role of Abigaille under the baton of Maestro Riccardo Muti. In June 2022, Oksana sang Aida at the Badisches Staatstheater Karlsruhe followed by Abigaille at the Domstufen Festival in Erfurt. In the fall of 2022, Oksana returns to Karlsruhe as Aida.