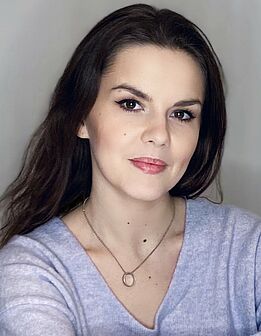 Young Russian soprano Kseniia Proshina joined the Academy of Paris National Opera in 2019. During the 2021-22 season, Kseniia performed on the stages of the Paris and Dijon opera houses in several productions, such as Le Nozze di Figaro, L’incoronazione die Poppea and Parsifal. In the fall of 2022 she will interpret the iconic role of Juliette in Roméo et Juliette by Charles Gounod at the Malmö opera in Sweden and later in the same season she will sing the title role of Zaide in Rennes and Nantes. Her following engagements will lead her to the Komische Oper Berlin, where she will first sing Romilda in Händel’s Xerxes and then the Tsaritsa of Shemakha in Rimsky-Korsakov’s opera The Golden Cockerel (Le coq dòr).

Kseniia was born in Samara, where she first studied piano and voice at a local music school before continuing her studies at the Academy of Arts in the class of Professor Raisa Gladkova. As a part of her studies she sung the title roles in Rimsky-Korsakov’s Snegurochka (The Snow Maiden) as well as in K. Molchanov’s opera Zori zdes’ tihie (The dawns here are quiet).

In 2014, Kseniia moved to Italy to study with Professor Alessandro Svab at the Accademia Lirica Santa Croce in Trieste, Italy where she prepared and performed roles such as Gilda in Rigoletto, Adina in L’Elisir d’Amore and Susanna in Le nozze di Figaro.

Kseniia has been awarded prizes in several singing competitions, including the Hramov Competiton in Samara, the Toti del Monte in Treviso and the Francesco Vinas in Barcelona. In 2020, she won the Grand Prix of the International Gianluca Campochiaro competition, held in the famous Teatro Massimo di Bellini in Catania.

After three years at the Académie of the Opéra National de Paris, Kseniia Proshina makes her debut in the title role of Juliette in Gounod's "Roméo et Juliette" at the Malmö Opera.