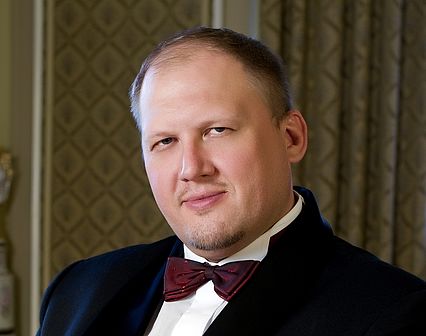 Taras Shtonda is not only a principal soloist at the National Opera of Kyiv and an “Honored Artist of Ukraine”, but also a frequent guest at major opera houses and festivals around the world.

In the early stage of his career, Taras Shtonda debuted as Dossifey in Mussorgsky’s Khovanshchina and sang the role among many others in Moscow and Warsaw (2002). His early roles also included Raimondo in Lucia di Lammermoor in St. Petersburg (2003) and Pimen in Boris Godunov at the Royal Opera House in London (2006). His further international engagements included Boris Godunov and Boris Izmaylov (Katerina Izmaylova) in Moscow, Oroveso (Norma) at the Toulon Opera, Faust (The Fiery Angel) at Opera de Lyon, Mephisto (Faust) in Budapest and Wotan in Wagner’s Die Walküre in St. Petersburg. At the Savonlinna Opera Festival Shtonda sang a highly acclaimed Pimen in Boris Godunov alongside Matti Salminen.

Some other highlights of his career include performing the role of Prince Gremin (Eugene Onegin) at the Oslo Opera House as well as the Glyndebourne Festival, Mamyrov in Tchaikovsky‘s Enchantress at the Vlaamse Opera Antwerp, Grand Inquisitor (Don Carlo) at the Bayerische Staatsoper in Munich, as well as the Four Villains (Les contes d’Hoffmann), Count Walther (Luisa Miller), Gurnemanz (Parsifal) and Nilakantha in Delibes' Lakmé at the Malmö Opera.

His most recent successes include his role debut as Hagen (Götterdämmerung) at the Theater Kiel, Hunding (Die Walküre) at the Frankfurt Opera, Hagen at the Oviedo Opera, Fafner (Rheingold / Siegfried) at the Grand Théâtre de Genève and Boris Godunov in the Teatro Verdi in Trieste.

In March of 2022, Shtonda jumped in to the Ring production of the Oper Leipzig singing Fafner and Hagen, as well as Gurnemanz (Parsifal). In the fall of 2022, he will sing the role of the Grand Inquisitor (Don Carlo) at the Bremen Theater, the role that he will also perform in his Covent Garden debut in London in June 2023.  His role debut as Daland in Flying Duchman by Richard Wagner took place in August 2022 at the Klaipeda Opera Festival in Lithuania.

Taras Shtona starts and ends the 22/23 season with Grand Inquisitor: