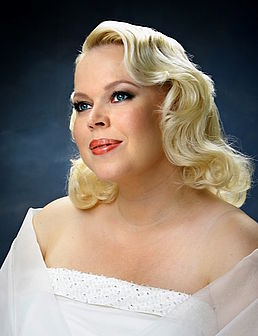 Johanna Rusanen was born into a family of musicians in Kuopio, Finland. Having received her Master’s degree in Music at the Sibelius Academy under the guidance of the well-known Wagnerian soprano Anita Välkki, Johanna completed her studies in Berlin and Vienna and was a member of the young artist program at Deutsche Oper Berlin for two years.

Meanwhile, Johanna Rusanen has evolved into one of the most interesting Finnish dramatic sopranos of her generation. Her incredible vocal flexibility and strong singing technique allow her to interpret heroines of the German, as well as the Italian or Finnish opera literature.

She made her debut as Venus (Tannhäuser) at the Tampere Opera in March 2012, produced by stage director Vilppu Kiljunen. Soon after that, she sang the lead role of Old Aliide in the world premiere of Purge by the Estonian composer Jüri Reinvere, based on the bestselling novel of Sofi Oksanen.  Her next role debut was Turandot at the Finnish National Opera in 2013, followed by another Turandot with Maestro Pinchas Steinberg at the Teatro Regio in Turin. In the following season, she interpreted Tosca at the Savonlinna Opera Festival and Leonora (La forza del destino) at Tampere Opera as well as her first Ortrud in Wagner’s Lohengrin at the Teatro Municipal in Sao Paulo. In spring 2016, Rusanen celebrated her debut as Isolde at the Finnish National Opera, where she sings also her first Brünnhilde under the baton of Esa-Pekka Salonen. In the summer of 2021 she made her debut as Chrysotemis in Elektra at the Théâtre du Capitole in Toulouse.

Her major roles also include Tatjana in Eugen Onegin, Marie in Wozzeck, Amelia in Un ballo in maschera and Donna Elvira in Don Giovanni. In recent years, Johanna Rusanen has won particular acclaim for her portrayals of strong women in Finnish operas, her best-known performances being Riitta in The Last Temptations in Nivala (2009), Anna in Sallinen’s Ratsumies at the Savonlinna Opera Festival (2005-2006) and Aalo in The Wolf’s Bride by Pylkkänen in Helsinki (2006).

Johanna has performed as an oratorio soloist and has given lieder recitals in numerous European countries as well as in Japan, Chile, the United States and North Korea. The soprano part of the Kullervo Symphony by Jean Sibelius has become one of her trademark pieces. She has recently performed in Kullervo, at Prag Spring festival, Tokyo and at the Grant Park Music Festival in Chicago. Her interpretation of Penderecki’s Polish Requiem under the composer’s baton was awarded a Grammy in 2017.