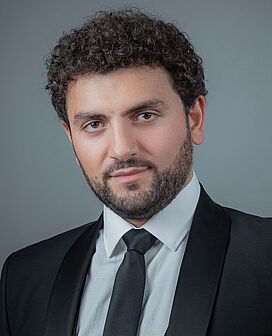 Young Armenian tenor Tigran Hakobyan is a soloist of the Armenian National Opera in Yerevan. He graduated with excellence from the Komitas State Conservatory in Yerevan in 2015, where he studied with distinguished soprano Svetlana Kolosaryan. Tigran has participated in the masterclasses of Dolora Zaijick, Gegham Grigoryan, Suren Shakhijanyan and Dale Fundling.

From 2017 to 2018 Tigran served as a soloist in the Military Ensemble for the Ministry of Defense of the Republic of Armenia. Following his service, he joined the young artist opera program of the National Academic Theatre of Yerevan.

During this time (2018-2021) Tigran sang lead tenor roles in Chukhajyan's opera "Karine" and in the opera "Anush" by Armen Tigranyan, as well as Nemorino in "L'Elisir d’Amore", conducted by Maestro Alessandro Bonato. In addition to opera, Tigran has been a tenor soloist in Beethoven's Ninth Symphony and Mozart’s Requiem with the Armenian State Philharmonic Orchestra under the baton of Maestro Eduard Topchian.

In 2021, Tigran Hakobyan became a soloist of the Armenian State Opera and took part in tours to Italy. In 2022, he performed the role of Mario Cavaradossi in Yerevan as well as Rodolfo in a semi-staged production of La Bohème. In the spring of 2022, Tigran made his debut as Alfredo (La Traviata) at the Armenian National Opera and his international debut as Cassio (Otello) at the Czech National Theatre in Brno. In the summer, the production toured at the Thurn und Taxis Festival in Regensburg.

This fall, Tigran will sing Rodolfo in a touring production of La Bohème in Sweden and Denmark with the Malmö Opera Company.

Tigran Hakobyan as Rodolfo on tour in Sewden