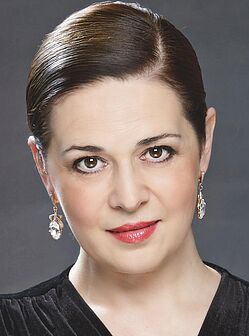 Danik started her career in 2006 as a jugendlich-dramatic soprano. She sang a variety of important roles at the Finnish National Opera, the Savonlinna Opera Festival, the Rialto Theatre Copenhagen, the Turku Music Festival and the Berwaldhallen Festival among others.

In 2012 Danik switched to the mezzo-soprano repertoire and  her debut in 2014 as Eboli in Don Carlos at the Opera Chemnitz was received with great enthusiasm among critics and the public. In the 2016 season Anna Danik made her debut as Wellgunde in Das Rheingold and Götterdämmerung and Schwertleite in Die Walküre under the baton of Daniel Barenboim at the State Opera Berlin, where she also covered the role of Klytämnestra in Elektra in Patrice Chéreau’s production.

In the winter of 2017 she sang the part of Luonnotar in the world premiere of opera Die Kalewainen in Pohjola by Müller-Berghaus in Turku. Soon after, Anna Danik sang her first Amneris at the big open-air spectacle of Theater Ulm in Germany. It was highly acclaimed by the press as well as her Woman in Sallinen’s opera Horseman in Pori. This production celebrated the 100 years of independence of Finland.

In the following 2017/18 season Anna Danik performed in both the Italian and German repertoire: she sang Emilia (Otello) at the Savonlinna Opera Festival and the Bolshoi Theather, Klytämnestra (Elektra) at the Badisches Staatstheater Karlsruhe and covered Klytämnestra at the Teatro alla Scala, Milano followed by Amneris (Aida), Beethoven’s Ninth Symphony, and Stravinsky’s Les Noces at the Finnish National Opera, Helsinki.

During Covid-19 in the 2020/21 season, performances of Sonetka (Lady Macbeth of Mzensk), Schwertleite (Walküre) at the Finnish National Opera, First Norne (Götterdämmerung) and Dalila were all cancelled, but she managed to do concerts of the Wesendonck Lieder by Wagner with Turku Philharmonic Orchestra under the baton of Okko Kamu.

The following season included Eva in the world premiere of the opera Kain & Abel composed by Christoph Ehrenfellner for Theater Nordhausen, Schwertleite in Die Walküre at The Royal Danish Opera and the new production of The Ring at the Helsinki National Opera, as well as her house debut as Erda in Das Rheingold in a new production of The Ring for Zurich Opera. This summer, she jumped in to sing Amneris at the Savonlinna Opera Festival.